BOOK AND TRAVEL WITH CONFIDENCE
Read more about our enhanced flexibility

Cycling in Andalucia: Seville to Cadiz

Email us Order a brochure

Cycling in Andalucia: Seville to Cadiz

It could be argued that Andalucia is the most quintessentially Spanish part of the Iberian Peninsula. Defined by its Moorish architecture this land of contrasts boasts fertile land, historic hilltop towns, stunning beaches and excellent local food. This self-guided cycle takes you from the magical city of Seville, along small country roads and through Mediterranean woodland to the town of Arcos, one of Andalucia's most dramatically positioned pueblos blancos (white villages). From here you take a journey into the heart of the Flamenco traditions of Jerez - famous for its sherry wines, before ending in Cadiz; thought to be the oldest city in western Europe. The accommodation is in spectacular traditional and modern hotels of the region, and the food is plentiful, fresh and delicious.

If you have any questions about this holiday call our sales team on 01606 720199, use our live webchat (we open again 9am Monday) or email sales@headwater.com 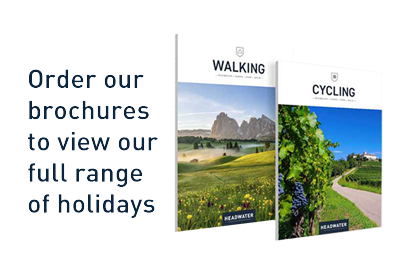 If you've any questions about this holiday call our sales team on 01606 720199 , or email sales@headwater.com

Make your own way to Seville. We recommend arriving early or arranging extra nights to ensure you spend as much time as possible in this magical city of international fame. Its culture, history and folklore make this an exceptional tourist destination. Legend tells us that the city was founded by Hercules and its origins are linked with the Tartessian civilisation. Now it is the capital of the Andalucian region and most widely known for its ornate Alcazar castle complex, built during the Moorish Almohad dynasty, and its 18th Century Plaza de Toros de la Real Maestranza bullring. The Gothic cathedral is home to the tomb of Christopher Columbus and a famous belltower; the Giralda. The birthplace of Flamenco is generally accepted to be this area of Andalucia, and Seville is the perfect place to enjoy an evening show alongside your traditional cuisine.

Leave the city using its extensive network of cycle tracks. Head north-east to reach a dedicated cycle route on a good dirt road beside the river Guadaira. Cycle amongst flat landscapes of cereals and sunflower plantations, you will pass several small towns before you reach the historic walled town of Carmona, which boasts several churches, palaces, and an imposing Arab fortress.
Meals: Breakfast

Leaving picturesque Carmona you ride south, a delightful route along quaint country lanes overlooked by sunflowers and olive groves. Today's ride takes you through several small, traditional towns where you can enjoy a refreshing drink in one of the many bars along your route. Finish in the small town of Montellano with its pink marble buildings and natural monuments; perfect for an evening of relaxation.
Meals: Breakfast

From Montellano you can see the mountains of Grazalema far in the distance. Today you will experience some hills, but not mountains, as the cycle takes you into pristine Mediterranean forest. Most of the cycling is along very quiet country roads, except for a section (about 8km) along a 'Via Verde' (a disused railway line now used as a cycle lane). You will cycle past the typically Andalucian town of Puerto Serrano; a good place to stop for lunch. You end in Arcos de la Frontera; one of Andalucia's most dramatically positioned pueblos blancos (white villages).
Meals: Breakfast

From Arcos you pedal across undulating terrain, following the river Guadalete downstream along quiet country roads. Mediterranean woodland and agricultural land characterise the landscape. There are many small villages to stop along the way for a welcome break! The town of Jerez holds worldwide acclaim for its sherry and brandy production, but is equally famous for its fine horses and Flamenco music and dance.
Meals: Breakfast

Heading south today, you reach the sea and the ancient city of Cadiz. The ride will take you into the stunning small town of El Puerto de Santa Maria, where there are many restaurants tempting you with the fish catch of the day. Cadiz is the oldest city in western Europe, with monuments such as the grandiose structure of the Cathedral Nueva, and the red brick building of the Gran Teatro, along with the stunning beaches are enough to encourage any visitor to fall in love with it. Your ride will end along the beach cycle paths, and lead you to your last Parador for one final night of luxury.
Meals: Breakfast

You trip ends after breakfast in Cadiz. If you have time it is possible to arrange additional nights here, or there are regular trains back to Seville taking around 1h 35mins.
Meals: Breakfast

During your holiday you stay at the following hotels. If you'd like to extend your time at any of these or, if you'd like to enhance your stay with an upgraded room, just let us know at the time of booking. If you'd like to keep your bikes with you for any extra nights we can arrange this for you for just £ per adult per day and £ per child per day.

To find out more call our sales team on 01606 720199, use our live webchat (we open again 9am Monday) or email sales@headwater.com

On this trip you will stay in 3 different Paradors. A Parador is defined as 'luxury accommodation in a traditional building' and Andalucia is an excellent place to experience some truly stunning accommodation. Highlights include an impressive Arabic castle from the 14th Century in Carmona, an historic noble house in the centre of Arcos and a 19th Century palace in the centre of Jerez. In Seville and Cadiz the centrally located hotels are 4-star, and in Montellano you spend the night in an authentic Andalucian hacienda surrounded by almond and olive groves. Most of the accommodation have pools, but please be aware that these are open on a seasonal basis.

All prices are based on 2 persons sharing, so if there is an odd number of people travelling in your party or you are travelling alone, there will be a compulsory supplement for a single room for the tour duration. For a solo traveller there is an additional charge to cover transfer costs.

Food is a hugely important part of southern Spain and a key part of Andalucian life is eating out. Dishes will comprise of some of the best locally grown produce. Olives, almonds, lemons and oranges are used in cooking, or in refreshing salads. Along the coastline you can be sure of fresh seafood and fish and the Serrano ham is a speciality from the mountain villages. Tapas originated in Andalucia, and in many places you will often receive small snacks served free with your drinks in a bar. Typical Andalucian dishes include; Gambas al Ajillo (prawns in garlic and chilli oil), Paella/arroz, Coquinas (clams) served with garlic, parsley and white wine, Calamares (squid), Tortilla Espanola, and churros (strips of deep fried dough) which are often eaten with hot chocolate, perfect in the early hours after a night out!

For this trip there is the possibility to upgrade to half board for a supplement of £175 per person.

Our aim is to provide holidays that are unbeatable for choice and flexibility. We've listed our most popular travel options below, however you aren't limited to these - we can tailor-make virtually any holiday to suit.

To find out more about the travel options available call our sales team on 01606 720199, use our live webchat (we open again 9am Monday) or email sales@headwater.com

Air prices include our standard flights/transfers
Out: Easyjet Gatwick to Seville 12:05/15:55, transfer to hotel is payable locally. Return: Transfer to airport 40 minutes then Easyjet Jerez to Gatwick 15:10/17:05 or 13:50/15:45 dependant on departure day.

Alternative Air Travel
Alternative flights, onward rail to your holiday area, and connecting private transfers can be arranged from most UK airports. If you would like to use one of the many 'low cost' airlines, we can book these on your behalf. We can also book UK shuttles to connect with your onward flight, please call for details and prices.

Popular alternative routes for this holiday include:

Standard transfers
Return transfer to Seville airport can be arranged at a supplement.

Should you require overnight airport accommodation, airport parking or even a uniformed chauffeur to take your car from your departure terminal and park it for you, we can arrange this for you through Holiday Extras. You can book airport parking, airport hotels and executive lounges directly through their website - or call us on 01606 720199 for further details of all the services on offer. Early booking is recommended to obtain the best availability and prices.

Here at Headwater we thrive on feedback from our customers. It's the only way we can continue to develop, and where necessary improve, our services and ensure our holidays continue to be the best they can be. However, as this is a relatively new holiday, we don't yet have any customer reviews available.

You can be confident that our pricing includes all the standard requirements of your holiday and many additional extras. Always ensure that you are comparing like for like when booking your holiday.

Management by your local Headwater-appointed agent

For further details, or to check availability, speak to our sales team on 01606 720199 (we open again 9am Monday) or complete our holiday enquiry form (we'll contact you at a time that's most convenient for you).

The prices quoted for each individual departure supercede those published in our current brochures. Air prices are subject to change and we advise early booking to obtain the best prices. Please see our Planning your holiday and What's included in the price? pages for additional information.

Children
This holiday is unsuitable for children.

Departures
Selected departure dates from 30th Sep 2020 to 24th Nov 2021, for 6 nights. All dates are subject to availability, please contact us to check.

Electric bikes
It is possible to hire electric bikes for this holiday at a supplement of £155 per person. As these are available on a first come first served basis, we recommend early booking to avoid disappointment.

The above prices include our standard flights/transfers
Out: Easyjet Gatwick to Seville 12:05/15:55, transfer to hotel is payable locally. Return: Transfer to airport 40 minutes then Easyjet Jerez to Gatwick 15:10/17:05 or 13:50/15:45 dependant on departure day.

Alternative Air
Flights can be arranged from most UK airports, with connecting transfers as required, prices and details on request.

For further details, or to check availability, speak to our sales team on 01606 720199 (we open again 9am Monday) or complete our holiday enquiry form (we'll contact you at a time that's most convenient for you).

Please note: The prices and travel options shown are provided for customers based in, and travelling from/to, the UK. We are happy to arrange holidays for non-UK customers however, if you are travelling from USA, Canada, Australia or New Zealand, we recommend that you contact your local agent as they can provide appropriate transport options and advice.

Due to the tailor-made nature of our holidays, we need a little more information in order for us to check availability for Cycling in Andalucia: Seville to Cadiz. Simply complete the form below (fields marked * are mandatory) and a member of our sales team will contact you (when it's most convenient for you) to provide availability information, travel options and an accurate price. Of course there's no obligation, but if you do wish to proceed with a booking they will be on-hand to assist you throughout the process.

Alternatively, you can call our sales team on 01606 720199 to discuss your requirements in more detail (we open again 9am Monday).