The Scottish Highlands offer some of the most evocative, dramatic scenery in the world. This sparsely populated, mountainous region has a history,  culture and climate all of its own. On this tour we focus on what’s known as the Speyside region, defined by the river of the same name.

Our adventure starts and finishes in Inverness, passing through what is perhaps better known as Scotch whisky country, as it is home to over half of Scotland’s distilleries, including some of the most famous. As we wind our way through the farmlands, over moors and along the fierce coastal scenery we take the opportunity to visit one or two.

It is hard to fully convey the wild beauty of the Highlands, with its birds of prey overhead and a coastline home to seals and dolphins, all the stuff of legend and folklore. Exploring by bike gives us that vital connection, allowing us to see and feel everything first hand.

This is a journey not easily forgotten.

If you have any questions about this holiday call our sales team on 1-800-267-3347, use our live webchat or email usa@exodustravels.com 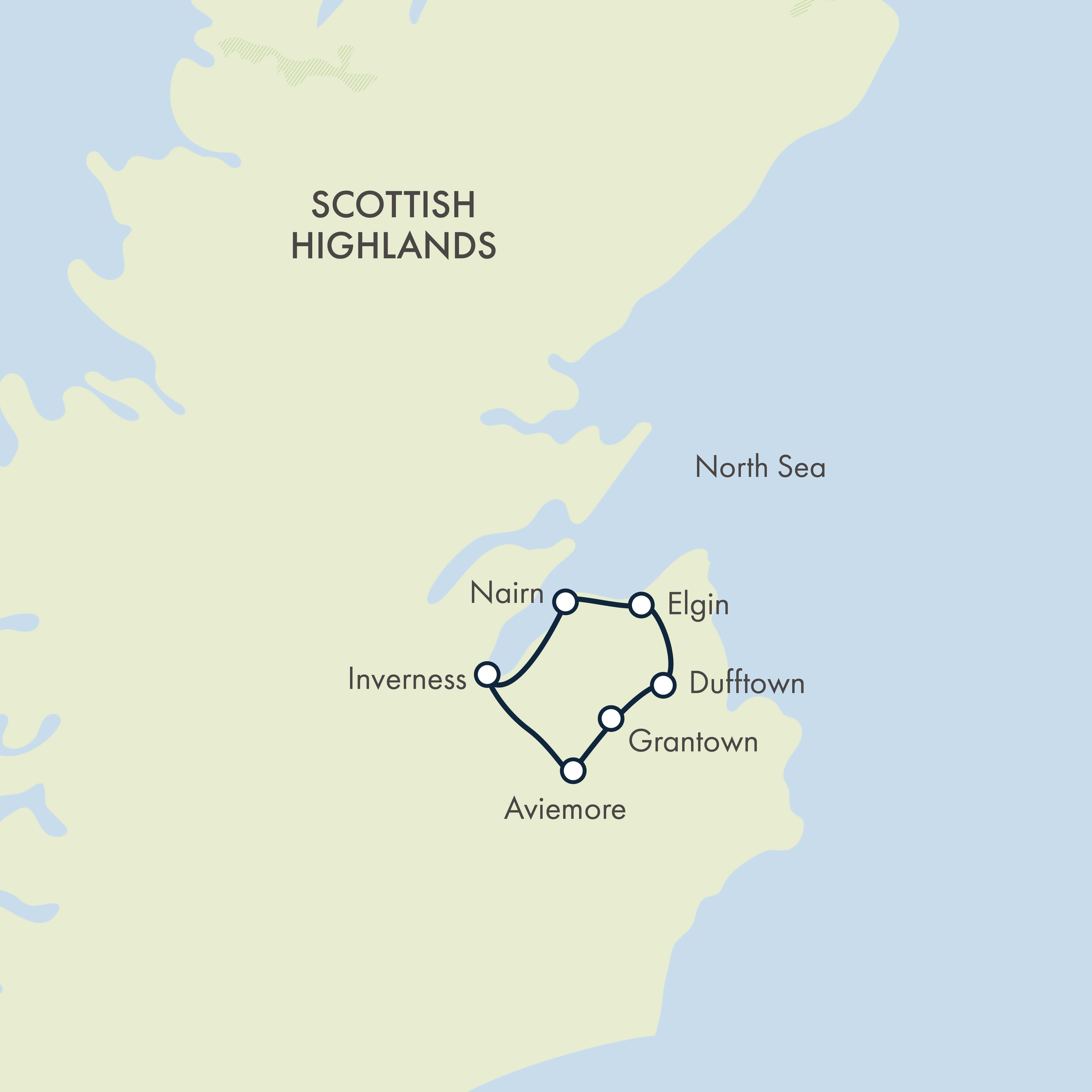 Arrive at your hotel in Inverness. The group briegfing will take place at 4pm. The rest of the day is at leisure to relax and enjoy exploring Inverness.

Check in to your accommodation, and the afternoon is free to explore Inverness.

Day 2: Cycle from Inverness to Aviemore through the River Nairn valley

Cycle from Inverness at the mouth of the River Ness and head south. This route climbs steadily as we leave the city and cross the River Nairn valley with views of the 29 span railway viaduct at Clava which is the longest masonry viaduct in Scotland at 1800 ft (549 m).As the road emerges from the forest onto more open moorland the route tracks and then crosses the River Findhorn just south of Tomatin. Tomatin is the last chance for refreshments before Carrbridge and also provides the first distillery visiting opportunity of the tour. The Findhorn is one of Scotland’s longest rivers, popular with kayakers and anglers.The mountain pass at Slochd marks the highest point in the route today. This pass is an ancient route and was formerly a “drove road” used to move cattle on the hoof from Highland crofts to markets in southern Scotland. Passing through Carrbridge, which is home to the “Carve Carrbridge” the Scottish Chainsaw Carving Competition each September and “The Golden Spurtle” World Porridge Making Championship in October. The Carrbridge from which the village gets its name dates from 1717 and is the oldest in the highlands.The day ends in Aviemore, once a railway junction, then ski resort and now a bustling village, popular all-year-round with visitors to the Cairngorms National Park.MacDonald Highlands Hotel or similar

Day 3: Ride through Abernethy Forest and enjoy a short break in Nethy Bridge on the way to Grantown on Spey.

Today we cycle to Grantown on Spey. You might even an old steam engine on The Strathspey Steam Railway which travels along the 10-mile section of the old Highland line from Aviemore to Grantown.The cycle route winds northeast through the native pines and juniper of the Abernethy Forest, home to red squirrels, wildcats, deer, grouse and birds of prey. You can find out more about the natural heritage of the area and Ospreys in particular at the RSPB nature reserve at Loch Garten.Stopping at the pretty forest village of Nethy Bridge for a convenient refreshment stop on the way to today’s destination, the traditional Highland town of Grantown on Spey. The Speyside Hotel Grantown or similar

Day 4: Discover the moorland landscape on the way to Tomintoul on two wheels.

Tomintoul is the highest village in the highlands and provides a good opportunity to refuel after the biggest climb of the day. It has a great art gallery and the range of Whiskies for sale at The Whisky Castle will amaze anyone.

It's not all downhill after lunch but there are a couple of long descents along Glenlivet then Glen Rinnes to the “Malt Whisky Capital of the World” - Dufftown. Dufftown is also home to the world-famous Glenfiddich Distillery.Tannochbrae B&B or similar

Day 5: Ride on the Speyside Malt Whisky Trail towards the coast to Elgin; visit the Scottish Dolphin Centre.

Today we cycle the famous Speyside Malt Whisky Trail. Much of the whisky's flavour comes from the barrels in which it matures, and a visit to the cooperage at Craigellachie, just four miles out of Dufftown, will be our first stop. We'll also spot one of the most famous whisky names, The Macallan along the way. This route sticks pretty close to the River Spey as we descend steadily towards the coast.The next village we pass through is Fochabers, which lies at the halfway mark. Here we will have a refreshment stop at the Baxters Highland Village, either at the Baxters food company's home or the restaurant in the Walled Garden of Gordon Castle. We then continue towards Spey Bay where the river meets the sea. We also stop at the Scottish Dolphin Centre, a haven for seals, ospreys, coastal birds, and dolphins.We then retrace our tracks to cross the Spey via the old railway bridge and on to Elgin. Should time allow, we can visit Elgin Cathedral. The cathedral is largely ruined but it is still an impressive medieval building. Alternative there's a spot of shopping on offer at Johnstons of Elgin, a well-known textile mill where you can see how raw cashmere is transformed into fine knitwear.Laichmoray Hotel or similar

Day 6: Cycle to Nairn via Hopeman, pass the former air force base at Kinloss.

Today we will leave Elgin and cycle along quiet country lanes to the coastal village of Hopeman. Keep an eye out for dolphins again as we follow the coastal path to the nearby village of Burghead, where the visitors centre tells the story of the area from its time as a Pictish fort through to the herring boom, which peaked in the early 1900s.A few miles further on, we pass the former air force base at Kinloss. This was once home to the RAF Nimrod anti-submarine squadron and mountain rescue operations. If time allows we can stop at a small aviation museum named “Morayvia”, which has ex-airmen on hand to explain all about the interactive exhibits' story.We carry on to the eco-village of Findhorn, which has a beautiful beach, harbour and small heritage centre. Findhorn is also home to the spiritual community of The Findhorn Foundation.We return back by Kinloss, passing by the attractive town of Forres, which is also home to the Benromach distillery, which we will stop for a quick tour before cycling onto Nairn for our overnight stay.Newton Hotel or similar

Day 7: Visit Bulnuaran of Clava on the way to Culloden Battlefield; ride back to Inverness.

Nairn is known for its two championship golf courses and its sandy beaches, a popular spot on sunny days. There’s a lot to pack in today and if time allows, we will visit the historical (and current) army base at Fort George, Clava Cairns and Culloden Battlefield.Along the route, we follow the south side of the Nairn Valley passing under the impressive masonry arches of the Culloden Viaduct that we glimpsed on day one.We also make a visit to the prehistoric burial cairns of Bulnuaran of Clava, which have long been a source of huge interest and have gained international fame recently, having featured in Outlander.Culloden Battlefield is up next, the site of the last battle fought on British soil in 1746. The excellent visitor centre shows the timeline of events before, during and after the battle in great detail. We carry onto Fort George (if time allows) and then back to the finish in Inverness.Glen Mhor Hotel or similar

We say our goodbyes. Our trip ends at our hotel in Inverness.

During your holiday you stay at the following hotels. If you'd like to extend your time at any of these or, if you'd like to enhance your stay with an upgraded room, just let us know at the time of booking. 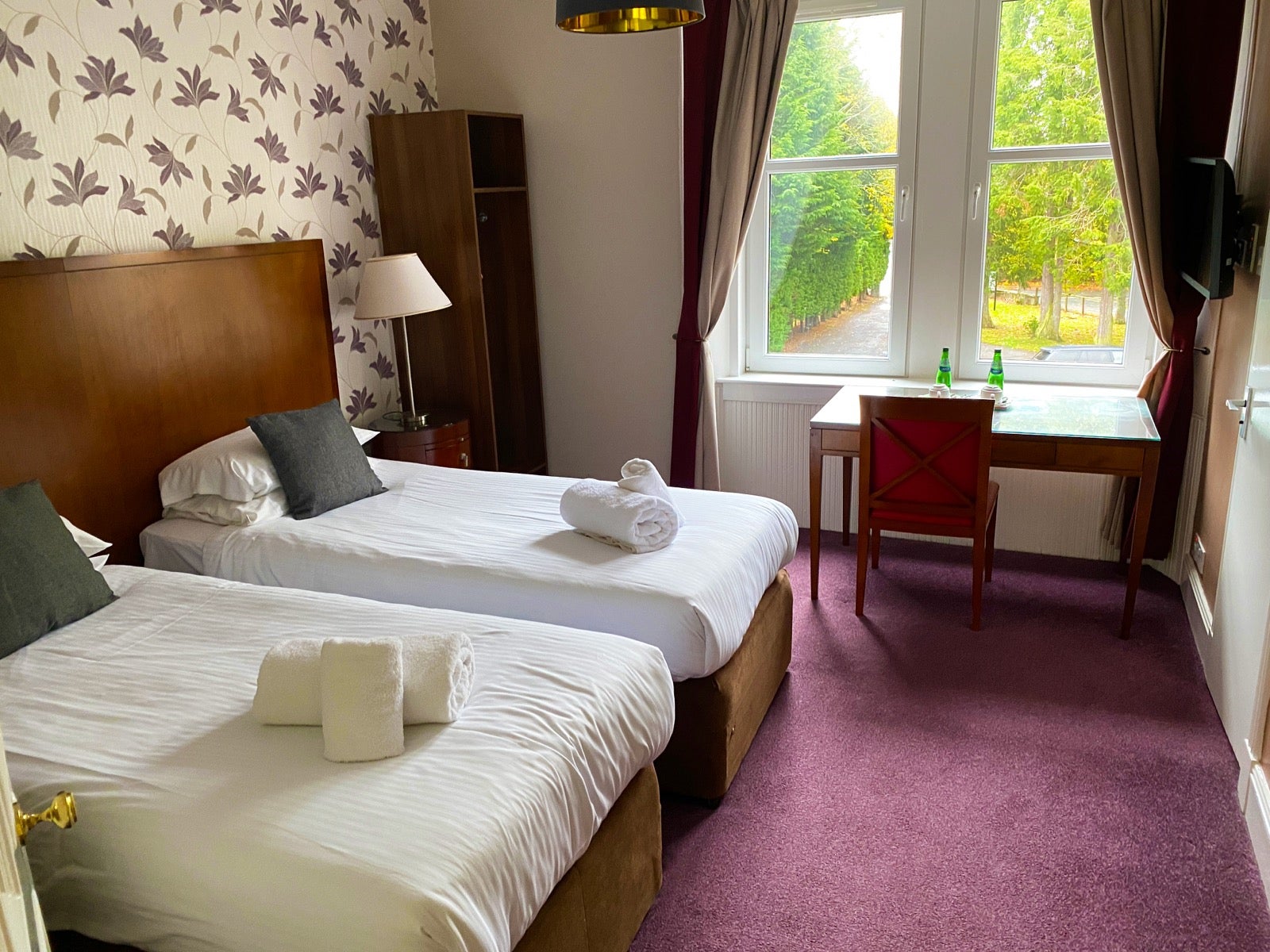 Throughout the week, you will spend 7 nights in 3-4 star hotels and guesthouses. The accommodations have been selected for their charm, character and offer a comfortable stay. All accommodations offer rooms with en-suite.

All breakfasts and 1 dinner included.

Lunches can be purchased from local bakeries, shops and mini-markets which will offer you the opportunity to try lots of local produce and delicacies. Packed lunches may also be possible to organise with accommodations stayed at during the trip.

Dinners will be taken at accommodations we stay at or traditional local pubs along the way.

Our aim is to provide holidays that are unbeatable for choice and flexibility. We've listed our most popular travel options below, however you aren't limited to these - we can tailor-make virtually any holiday to suit.

To find out more about the travel options available call our sales team on 1-800-267-3347, use our live webchat or email usa@exodustravels.com

Travelling land only: 7 days starting and ending at the hotel in Inverness.

Full joining instructions including local emergency numbers will be sent to you as part of our Final Joining Instructions. If you do not receive these at least a week before departure, or require them earlier please contact our office or your travel agent.

Here at Headwater we thrive on feedback from our customers. It's the only way we can continue to develop, and where necessary improve, our services and ensure our holidays continue to be the best they can be. As this is a relatively new holiday, we don't yet have any customer reviews available from our customers.

You can be confident that our pricing includes all the standard requirements of your holiday and many additional extras. Always ensure that you are comparing like for like when booking your holiday.

All breakfasts and 1 dinner included

Transport as listed in itinerary & luggage transfer throughout

For further details, or to check availability, speak to our sales team on 1-800-267-3347 or complete our holiday enquiry form (we'll contact you at a time that's most convenient for you).

To enquire about this holiday, or for further information, call our sales team on 1-800-267-3347 or complete our holiday enquiry form.

We do not currently have departure dates and prices available on-line. The season may have ended for this tour, or we are still in the process of adding these details to our website. Please contact us for further details.

This holiday is operated by our sister company, Exodus

Travelling land only: 7 days starting and ending at the hotel in Inverness.

Full joining instructions including local emergency numbers will be sent to you as part of our Final Joining Instructions. If you do not receive these at least a week before departure, or require them earlier please contact our office or your travel agent.