Why the Dordogne could well be France's best family destination

Why the Dordogne could well be France’s best family destination

There’s a reason why Brits feel a familiar sense of home in the Dordogne. This south-westerly department of France has a distinct air of the Cotswolds about it whilst it manages to retain the notable Southern French joie de vie approach to life. It’s not hard to soak up the good vibrations in this region of the world; life flows as slowly as the languid Dordogne River that cuts through the heart of the region, providing this beautiful hill country with an abundance of vibrancy. Whether it’s taking in the soothing atmosphere or engaging in the myriad activities that come with the pleasantly undulating landscape, the Dordogne has certainly got something for everyone in the family.

Though the kids may not be as excited about the Dordogne River’s UNESCO Biosphere Reserve listing as you, they’ll love skimming its calm surface on canoes; the number one activity to do in the Dordogne. The route is undemanding and yields views of rugged cliff sides and picturesque châteaux perched atop the rolling hills that can seldom be seen from anywhere else. Travelling by canoe allows access to more out-of-the-way towns and riverside beaches shielded by limestone cliffs and chestnut forests – sure to be a hit with all the family. Don’t forget to pack a picnic to enjoy en route, perhaps stopping at one of the little beaches along the way to break up the trip for children. 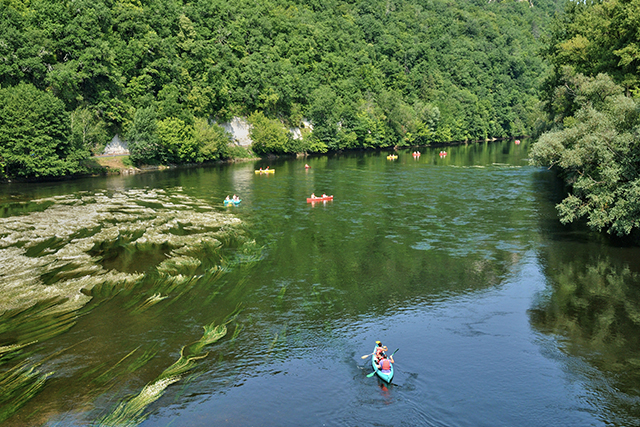 Canoeing on the Dordogne river in Castelnaud la Chapelle.

One of the highlights of winding around the tranquil bends of the river is seeing the seven towers of Martel springing from the rocky outcrop. A stop in this pretty town is essential if only for one thing, the adorably-named La Truffadou or Truffle Train, a steam train that clings close to the high mountain wall and provides splendid views of the valley below as well as the towering Mont Mercou above. This train used to transport truffles around the region for about 100 years before it was turned into a tourist attraction; not that the kids will care, they’ll be happy following the dips and crests of the expansive countryside outside.

After traversing the high and the low altitudes by train and canoe, you can meet in the middle by bicycle. Riding the many wide, gently bending roads could not be safer and parting the many hills through the middle offers some very unique views. Rolling into Sarlat, the Dordogne’s most visited town, can not be missed. Compared to the minimal, sleepy nature of smaller towns and villages of the Dordogne, bustling Sarlat feels like a veritable city, with its wider avenues and lively old quarters. The honey-hued town has a festival virtually every month with something to appeal to everyone, including the goose fair, Easter egg hunt, traditional games and Christmas market. The markets of most note, however, are the twice-weekly food markets, where the delectable gastronomy of the Dordogne can be sampled through foie gras, cèpe mushrooms, magret, truffles, walnuts and strawberries. 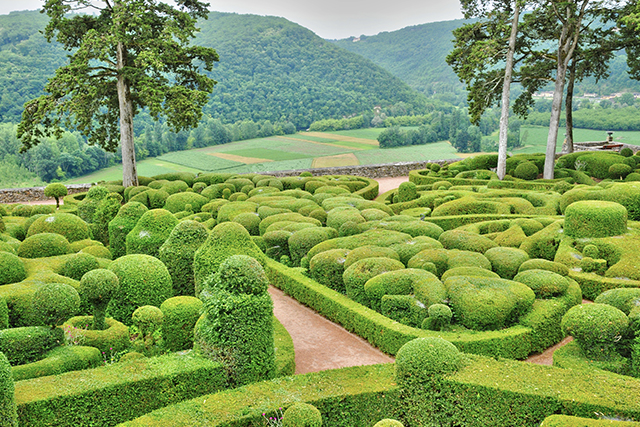 The picturesque garden of Marqueyssac in the Dordogne.

One of the most popular stop-offs for cyclists is the Jardins de Marqueyssac, where the whole family can explore the unique, bulbous topiary that form labyrinthine paths above the Dordogne River. The evenings of July and August are candlelit affairs where the magic of the gardens becomes amplified further by the sense of mystery and serenity enveloping the air. Nearby Saint-Vincent-de-Cosse provides further views of the snaking river from its C13 hilltop château, as well as easy access to the zipline at Airparc Perigord; another good option of panoramic views for the more adventurous kids and parents.

The less inclined can take a trip to Le Préhisto-Parc, an engaging and educational theme park denoting the daily lives of Neanderthals who occupied the Dordogne region 35,000 years ago. The plethora of limestone cave systems cut into the crags and inlets that line the Dordogne River are treasure troves of prehistoric memorabilia; the most noted being the Lascaux caves, a UNESCO World Heritage site that sadly had to be closed for preservation purposes. An exact replica was built nearby in December 2016 and it prides itself on being almost indistinguishable from the original. 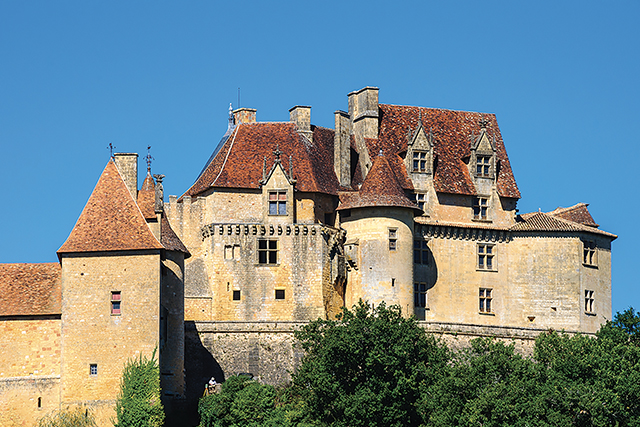 Castle of Biron, the Dordogne.

Forty-five minutes away from the caves lies Souillac, an attractive town used as a defensive post on the road between Toulouse and Paris. Much of the rampart system, and the town’s iconic Abbey Sainte-Marie, was ravaged during the Wars of Religion of the C16, but the abbey was restored to its splendid, geometric glory in the C17. The town today has something for everyone, while adults can enjoy the history and the Louis Roque distillery with its focus on prune and walnut liqueurs, the kids can splash about in Quercyland, the riverside waterpark, or trot horses around the Club Hippique horse-riding centre. The Museum of Automation has inter-generational appeal as old-style robots come to life in whimsical and occasionally fairly creepy ways.

Take look at one of the family activity holidays in the Dordogne.

Written on March 7, 2017 by Lawrence Haywood