Walking in Provence: it started with a film

Walking in Provence: it started with a film

Apologies to everyone who already knows me as a Jean de Florette bore, but it’s true to say that I’ve been prattling on about wanting to Go Walking in the Provence Hills since the tender age of 16, ever since I saw the heart-wrenching Pagnol tale at the cinema circa 1987. OK, so I think the setting may have been a little further south but that’s a mere technicality as I anticipate soaking up the rich Provençal flavour here in the Luberon hills.

Today, I’m embracing my inner adventurer and walking Day 6 of Headwater’s ‘Landscapes of Luberon’ from Hôtel Mas de la Senancole – a stunning luxe-meets-caractère former farmhouse on the outskirts of Gordes (oh so worthy of its ‘Plus Beaux Villages de France’ status) to Hôtel du Poète in (equally Instagramable) Fontaine-de-Vaucluse, precisely 10.7 km away. 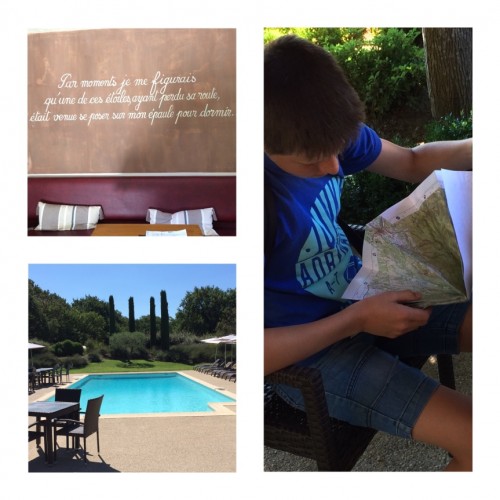 Walking or WiFi? That is the question…

Despite this much anticipated frolic-in-the hills-like-a-film-extra, it’s a slightly inauspicious start to the day:  in tow is my son – 13 – and his facial expression suggests he may not be sharing the love on the whole walking idea. Whereas I wouldn’t go as far as controversial French writer Michel Houellebecq – once referring to a child as “a sort of vicious and innately cruel dwarf”: harsh – Garçon is a tad growly today as I prise the i-Pad from his clutches. On one hand, I do understand his reluctance to leave the hotel’s sublime pool, but on the other, an opportunity to do something life-affirming, out-of-the-ordinary, energetic and just, well…together is simply too rare to miss and I’m going to get him up that hill by hook or by crook. We are also joined by Grandma – Mo – who, for the record is 72, up for the challenge, and behaving beautifully.

After a last poolside grand-crème, to a soundtrack of cacophonous cicadas –oh, and Garçon’s final mutinous attempt: an alleged podiatric injury, ha! – we tootle off under a perfectly cloudless August sky. A cheery gentleman bids us a good morning not with a ‘banjour’ in the accent provençale (trust me – you’ll need the subtitles in Jean de Florette) but en anglais. We wonder how he has picked us out as rosbifs, as we are affectionately known by the French, and conclude that it must be something to do with the un-olive skin, the over-enthusiastic power-walk arms…and Garçon’s cricket hat. 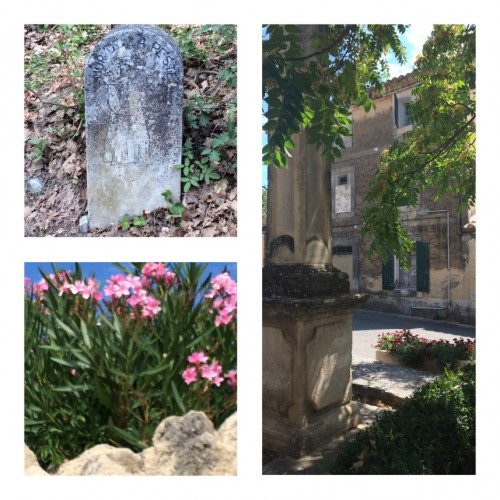 Immediately, just as super-knowledgeable and super-friendly Headwater rep Beckie said it would, everything from the classic Provence photoshoot appears before us, in particular an abundance of floral elements that seem to evade South Gloucestershire: olive groves behind ancient stone walls, almond trees, comedy cypress trees, the ubiquitous oleander…and before we know it, the picture-postcard village of Cabrières-d’Avignon is upon us. We’ve not yet covered much ground, but we nonetheless pause to take in the tranquil setting of square, war-memorial, fountain and we take the opportunity to pen a postcard or two.

Moving on, a further monument enlightens us on Cabrières d’Avignon’s history: in 1545, the village’s château saw the massacre of 700 ‘Vaudois’ men, women and children, a reformist group declared heretical by the Catholic church. (Grisly daytrips are us, I reflect: we’ve already been to Tolpuddle and Eyam this year. #empathytourism.) We continue to follow the route notes (which incidentally couldn’t be clearer, merci Beckie) towards the Mur de la Peste, a wall built by the residents of the village, mistakenly believing it could prevent the spread of the plague, ‘peste’ meaning plague, not pest. We proceed to climb the rocky hill out of the village, rewarded periodically by the stunning views promised by the brochure. The ascent’s cardiac effect is equally rewarding. 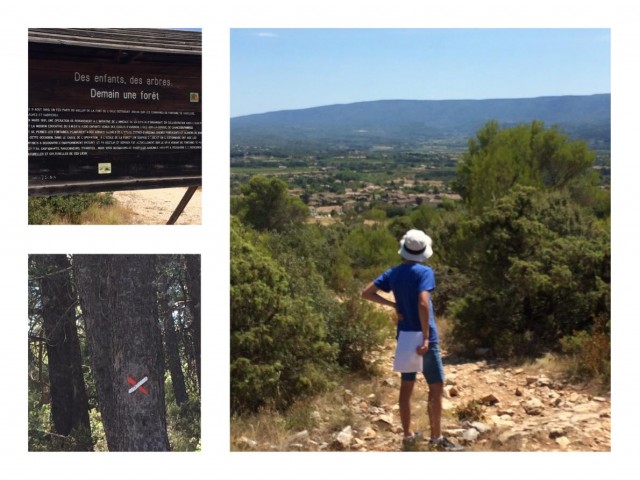 A surprise at the summit

At the top of the hill, I make a series of unexpected and miraculous observations. Without exaggerating (there is after all a journalistic tendency to turn all negative things positive within the space of an article), Garçon…

So, that thing I read somewhere, that “the urge to reach higher ground is a fundamental human instinct” would appear to be true and the quality-time I’d hoped for ensues. I try to freeze the moment for my memory bank and walking towards the gorge, this isn’t too much of an issue as the vistas are every-which-way. Look up: birds of dinosaur proportions fly overhead. (With our untrained eyes and without our I-spy books on us, we’re happy to assume they’re eagles.) Look down: grasshopper-like beings hop along the craggy path seeming to keep pace with us. (Their wings fan out to reveal a red underside – any ideas?)

A short stretch of road leads us to a more open and level footpath enabling us to take full advantage of the panoramics, this time over the far-reaching Vaucluse valley. It’s the kind of place that makes you stop to breathe in the abundant bouquet-garni as the pathways are lined with all the heady herbs (romarin, thym, origan) and we admire the sky a lot: after all, we’ve not seen much of this Pantone shade at home this year. It’s getting very warm now (I’m half expecting a parched looking Gérard Depardieu to peer out from behind said herb bushes) and suspecting that the sensible French font la sieste behind shutters at this hour, it’s fortuitous that as the temperatures climb, we do the opposite; it’s both downhill and shady from here. 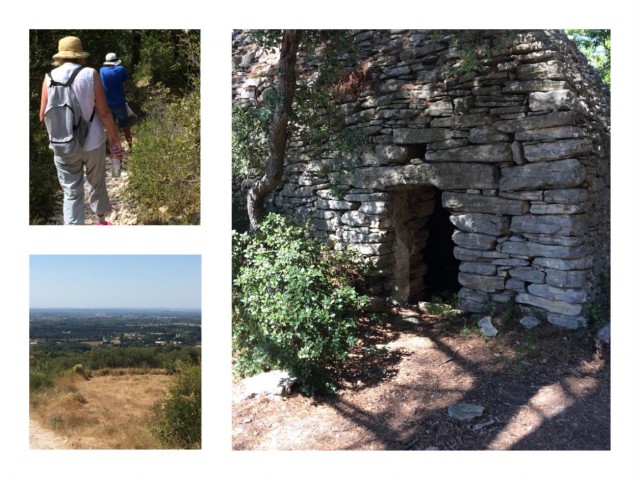 Sounds of the river and of cars soon alert us to our proximity to Fontaine-de-Vaucluse and we head towards the heart of town to see the promised sights, and more importantly, to procure the promised glace that Garçon is eager to get his paws on. We enjoy the pleasant hustle and bustle around town, admire the famous emerald waters and tuck into said ice-creams (pour moi, une glace à la lavande s’il vous plaît. When in Provence…) before seeking out Hôtel du Poète, as peaceful and luxurious a setting as we could have hoped for. OK, maybe this isn’t the Jean de Florette peasants’ backdrop, but I’m more than happy to switch sets to enjoy this. 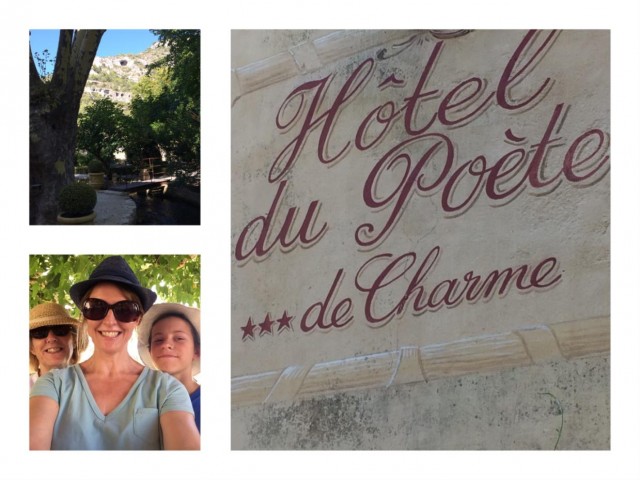 After a dicey start, it’s become the end of a perfect Provençal day and (without wishing to sound like a soppy fridge-magnet) today’s walk was a life-affirming celebration of togetherness. Garçon may no longer be of an age where he enthusiastically makes a holiday scrapbook, gluing in everything from the ferry ticket to the pain au chocolat crumbage, but I know these experiences leave lasting impressions on young souls; worked for me.

With thanks to Grandma, to Garçon and to Headwater.