Menorca’s capital of Mahón rose in importance in the 18th century, due to its strategic sheltered harbour, which enabled the British military to dominate the Eastern Mediterranean. As part of your holiday in Menorca you can take a walking tour of this historic city and enjoy its colonial legacy and laid-back Spanish charm.

Let’s start our walk at Plaça de s’Esplanada, a popular square with numerous cafés and a regular market, as well as a convenient car park. Take a moment to look at the old barracks on one side of the square, as the red colour is typical of the military buildings you’ll see on Menorca. There’s an excellent deli called Autentic to one side of the square where you can taste local produce and buy the artisan Mahón-Menorca cheese as well as dried sausages, honey and fruit liqueurs.

Setting off from the north side of the square, it’s fun to meander through the narrow town streets until you reach the Museum of Menorca at the end of Carrer d’Isabel II. The museum is set in a 17th century Franciscan monastery, built in the baroque style, and it’s worth a stop to see the beautiful stone cloisters and interesting exhibitions about the Talayotic culture of Menorca. 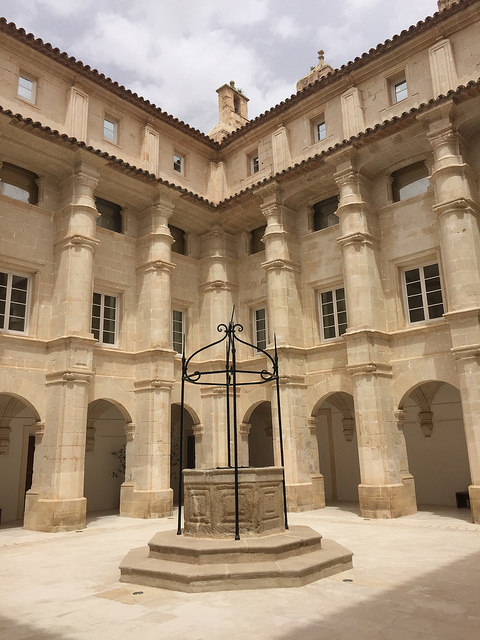 Stone Cloisters at the Museum of Menorca (C) Heatheronhertravels.com

A walk through historic Mahón

Continuing along Carrer d’Isabel II, the road runs parallel to the harbour, with narrow passages between the houses leading to viewpoints over the port. The houses here have balconies at the back and you can imagine the military sea captains who lived here keeping one eye on the comings and goings in the port. 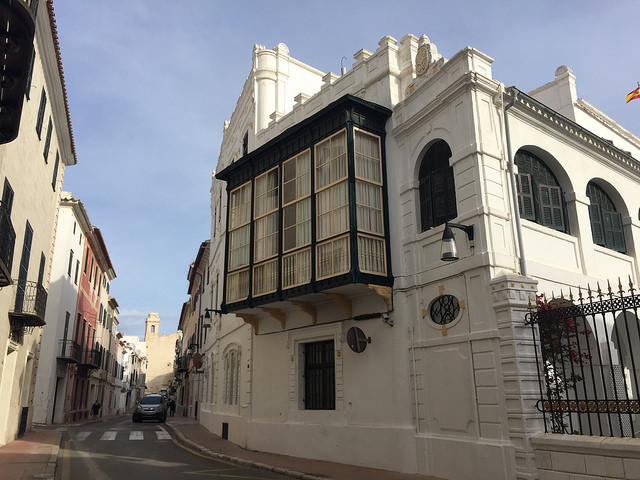 Halfway down the street is the impressive Governor’s Residence, which you’ll recognise by its large bay window. It was adopted by British Governor Richard Kane in 1722, when he moved the island’s capital from Cuitadella to Mahón. If you continue to the end of the street, there’s an impressive gateway of Sant Roc, which is one of the few remaining parts of the old city walls. 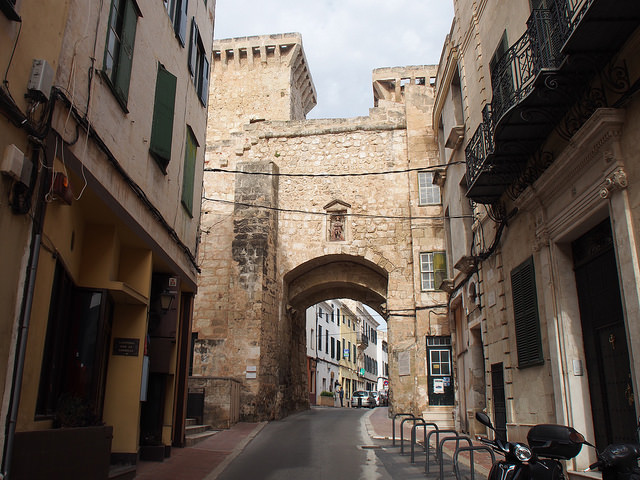 Our route, however, takes us only halfway down Carrer d’Isabel II, where we turn into a narrow cobbled street, Costa d’es General, to reach an archway and viewpoint over the harbour. The path continues downhill between the houses to the harbour front, where the cruise ships dock.

Tasting the gin of Menorca

Facing the port you’ll see the Xoriguer gin distillery and can pop in to see the stills in operation and have a free tasting. The gin was favoured by the British in the 18th century to keep the sailors happy, and there were once numerous distilleries, although only this one remains. The favourite aperitif on the island is a Pomada – gin mixed with fizzy lemonade – a refreshing drink with a deceptive kick, that’s served at all the local fiestas. 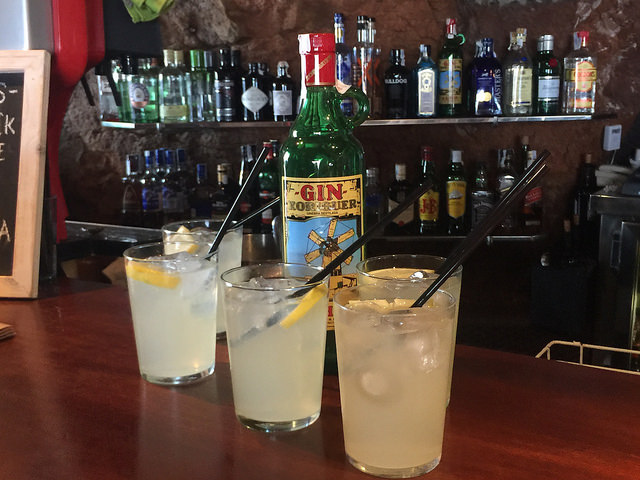 The steps to the old town

A little further along the harbour you’ll arrive at some grand steps that lead you back up into the old town. The kiosks here sell one-hour boat trips around the harbour, which is an excellent way to see some of Mahón’s military sights, such as the Arsenal and Quarantine hospital, from the water. 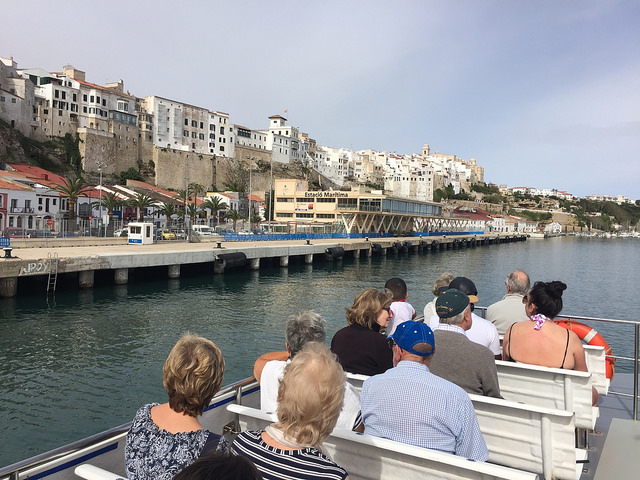 If you continue up the steps to the Plaça d’Espanya, you’ll find the Mercat del Peix, or fish market. In one half of the covered market the fresh fish is on sale in the morning, with spiny lobster and red prawns that you can order in all the seafront restaurants. The other half of the market is taken up with food stalls selling tapas, seafood croquettes and glistening olives to order with a beer or glass of local wine. The market is buzzing at the weekend, as locals come to buy their fish and catch up with their friends over a drink.

Walk a little further up the square to visit the Carmelite cloisters, now a covered market selling everything from local food specialties to clothing and shoes. If you are interested in the history of the island you could also visit the Centre d’Art I d’Historia Hernandez Sanz at Ca n’Oliver, a mansion which belonged to one of the most powerful families of Mahón. It’s normally only open in the morning and the collection of artworks is housed in a beautiful mansion with painted frescos and an ornate wrought iron staircase. 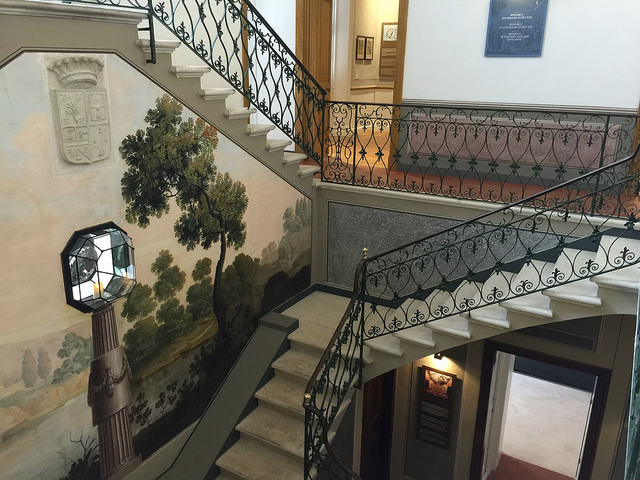 After lunch you can climb up the white steps again looking up to see the elegant Art Nouveau façade of Casa Mercedal, which was built by a noble Menorcan family and now houses a cultural centre. Close by you’ll find the imposing Town Hall of Mahón with its clock presented by the English Governor, Richard Kane. In the square there is a bar called Boinder, the Menorcan name for the overhanging bay windows, which you’ll see in this bar and other parts of the old town. 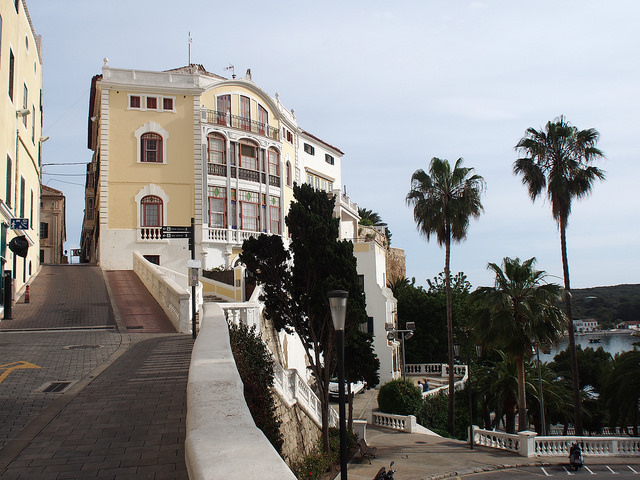 Most shops and museums close for lunch and reopen late afternoon, so the streets will be quiet. Now’s the time to enjoy getting lost in the backstreets, eating ice cream and stopping in a local bar or two. Once the shops re-open it’s time to meander up the main pedestrian shopping street of Carrer Hannover, which is a good place to shop for the distinctive avarca sandals and other fashion goods made on the island. If you continue up the street you’ll eventually arrive back at Plaça de s’Esplanada where we started our walk. 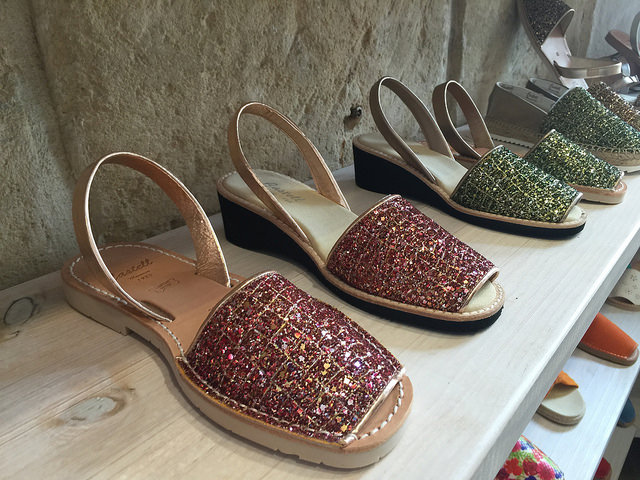 A day in Mahón is included as an option in your Headwater walking holiday in Menorca and of course you can always extend your trip with an extra day to discover all that this delightfully historic town has to offer.

Written on September 1, 2016 by Heather Cowper