The best of Austria's lakeside towns

The best of Austria’s lakeside towns

Images of deep blue lakes and sombre green and white mountains are some of the first pop-ups that come to mind when thinking of Austria; along with the phenomenal cultural achievements of its cities and the general relaxed atmosphere of its many small towns. The best places to unwind in Austria tend to be in, or next to, the country’s beautiful lakes, most of which are helpfully clumped together in the Salzkammergut region; the Lake District east of Salzburg. The towns that surround the lakes have an unbelievably quaint charm and feature unique and exciting histories. These are some of the best of Austria’s charming lakeside communes: 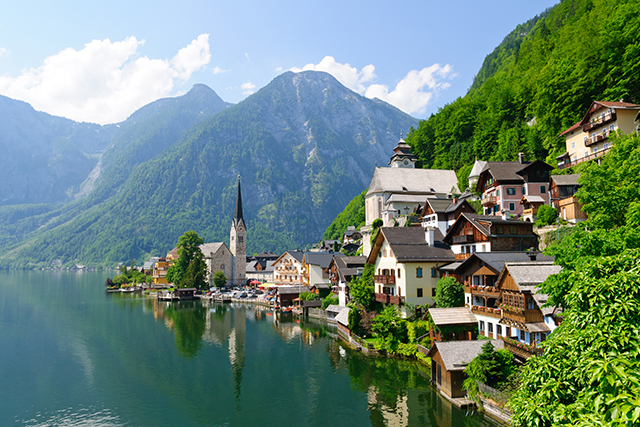 Understandably high on everyone’s lists is Hallstatt, a UNESCO-Heritage village with such international appeal that the tourism board of China has built a 1:1 scale replica in the country’s central Henan Province. The original village of Hallstatt has held much appeal in East Asia since its employment as a backdrop in the Korean drama Spring Waltz, and it’s not hard to see why it was selected to fulfill such a role. The village is framed on one side by steep mountains and on the other, juts out into Lake Hallstatt; the various buildings tentatively poking out onto the lake definitely make Hallstatt one of the most photogenic places in Austria.

The village is possibly the shiniest jewel in the already heavily bejeweled crown of the Salzkammergut region. The oldest village in Austria, Hallstatt is not only revered for its abundance of natural and man-made beauty, but also its three millennia old salt mining operations. Its surrounding mountains are steeped in a salty history that can be explored by a cable car that terminates at a viewing platform from which the glorious alpine beauty of the Salzkammergut unfolds in panorama. 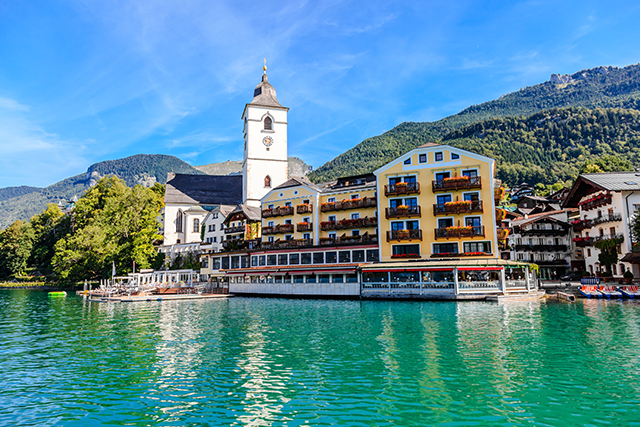 A glance in a north-westerly direction will reveal the vibrant green hills surrounding Lake Wolfgang and at their foothills, the pretty lakeside town of St. Wolfgang. The C15 church stands proudly in the middle of town with the many shops and houses running off across the lakeside. The SchafbernBahn railway provides stellar views of the peaks and troughs of the many mountains around the turquoise waters of the lake and, while the steepest railway in the country, contains several moments of gradual ascension when it winds in between the tall pines and perfect green pastures of Lake Wolfgang’s historic farmland.

St. Wolfgang is an activity hotspot and many flock here to dip their toes, quite literally, in the vast array of watersport options. Featuring some of the warmest waters in the Salzkammergut region at a summertime 24 degrees, it’s fair to say that the lake is the place to be. Swimming, sailing, jetskiing, tubing, snorkelling and scuba diving are all immensely popular here, but there are plenty of drier alternatives, such as cycling, climbing, paragliding or hiking around the idyllic fields. 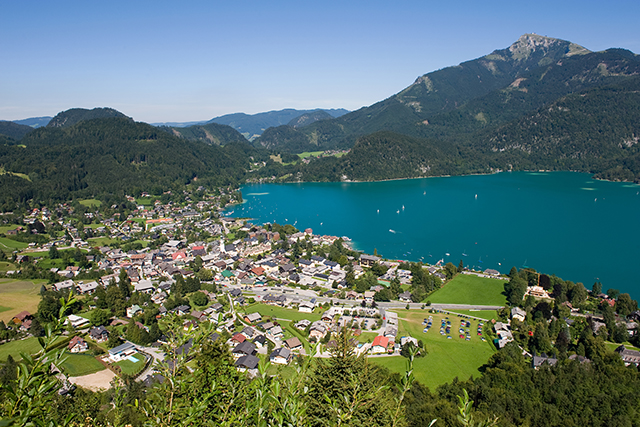 Quieter options abound on Lake Wolfgang; on the western and eastern ends of which lie St. Gilgen and Strobl respectively. Both towns are a mere cycle ride away from the roughly central St. Wolfgang and are thus popular with day-trippers who cycle around the perimeter of the shimmering water, stopping off at its many beaches along the way. Upon arrival at St. Gilgen, visitors are greeted by the site of an adorable town square from which you can start your trek along the Pilgrim’s Way to the menacing-sounding Falkenstein Chapel; a small church tucked away into the cliff face. Directly opposite, if you squint hard enough, you may be able to make out Strobl, another pleasant ride away. 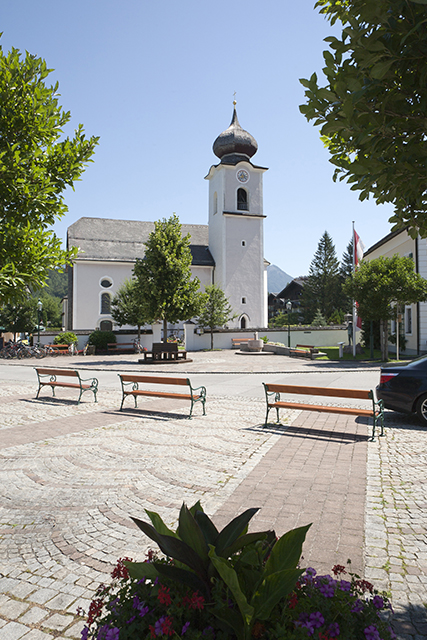 Strobl is known primarily for its downhill slopes and Nordic skiing facilities, popular during the winter time when the focus on sports leans more towards the mountains than the lake. There’s lots to see and do here in the summertime too, including a toboggan run and a wide range of water sports; you can also join one of the many hop on, hop off lake cruisers, visit the natural beach for sunbathing or take the bus (80 mins) to beautiful Salzburg, with its Renaissance gardens, Baroque palaces and the oldest open air theatre in Europe. 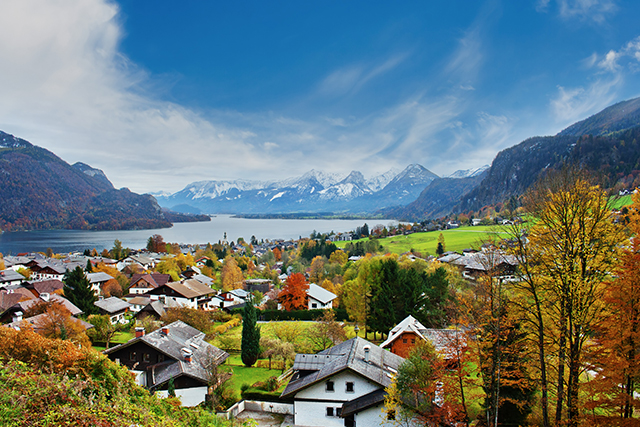 Directly north of Lake Wolfgang is a lake that, despite its English translation of ‘Moon Lake’, is shaped like a curvaceous seahorse. Lake Mondsee is the similarly-sporty brother of Lake Wolfgang, with temperatures that can reach 27 degrees, meaning sailing and kitesurfing are popular activities here. The lake and its main town were bestowed with the moon moniker by Duke Odilo who, while out hunting, got lost and was only able to estimate his location after the full moon began to light the lake’s sparkling water (or so the legend goes).

The town of Mondsee on the lake’s north-western edge is dominated by the grandeur of the Basilica St. Michael, which was the setting for the wedding of Maria and Captain von Trapp in The Sound of Music. The basilica’s showbiz affiliation coupled with the stunning mountain backdrop and calm, turquoise waters make Mondsee a hugely popular wedding destination. 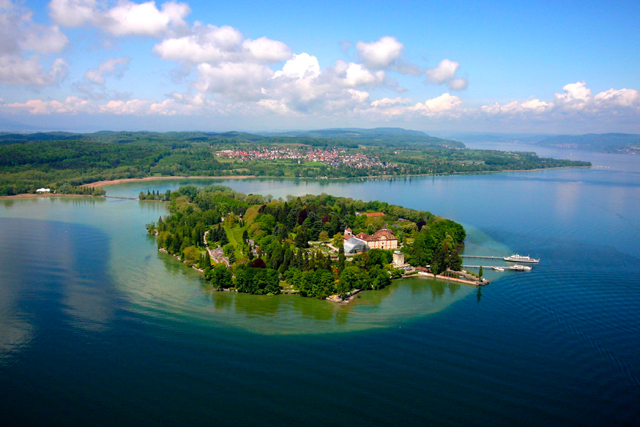 Lakes become much more sparse outside the Salzkammergut region, but there is one definite gem lying in the western ‘tail’ of Austria; Lake Constance – a lake of such esteem that three countries lay claim to different parts of it. Lake Constance is by far and away Austria’s largest, but Austria’s boundaries only hug a small part of it, while Switzerland claims the south-western side and Germany has the lion’s share in the north.

Despite owning only 10% of the shoreline, Austria makes good use of its portion with one of the country’s most iconic cultural events, the Bregenz Opera, the striking lakeside spectacle put on during the Bregenzerfeztspiele, a month-long music and art extravaganza starting this year on 19 July. Anyone cycling east will swing by St. Gallen, the Swiss city with a charming old town and UNESCO-Heritage library, before rolling up the shore towards Konstanz, a German city with a similarly enrapturing old quarter and web of dreamy, narrow, cobbled streets.

Explore Austria’s picturesque towns and villages on our selection of Austrian Lakes trips: