Stopping off in Strasbourg: A must-see on your Alsace holiday

Stopping off in Strasbourg: A must-see on your Alsace holiday

Not far from the Rhine, in the foothills of the Vosges Mountains, are the small vineyards where the wine of Alsace is produced. On these slopes the string of small villages and towns is known as the Alsace Wine Route. For centuries the Rhine was one of Europe’s most important trade routes and in the Middle Ages Alsace was a source of the highly prized ‘Rhenish wines’. 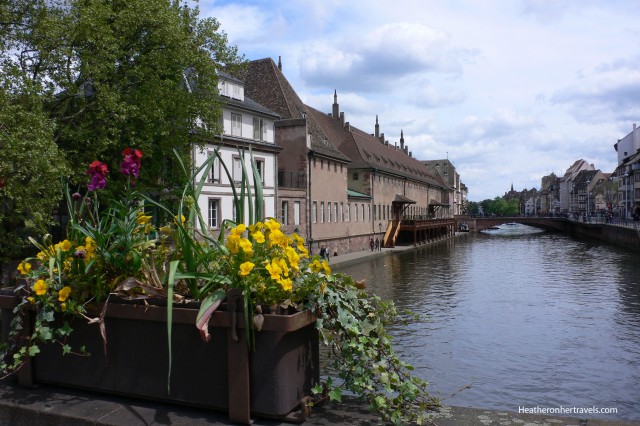 The picturesque walled towns, winding streets and half-timbered houses are testament to the wealth of the region built on the wine trade. While on your Alsace walking or cycling holiday you’ll pass through these pretty villages and find plenty of opportunity to try the Sylvaner, Riesling and Gewürztraminer wines that are produced here. 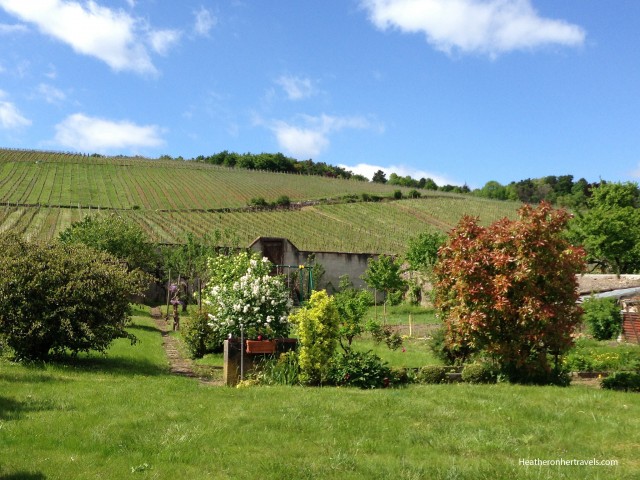 While you’re in the region of Alsace, Strasbourg is the perfect place to visit – a city with a mediaeval heart and a fascinating history.

Being on the border of France and Germany, Strasbourg has changed hands and been fought over many times over the centuries. Although the city is now in France, the history, culture and appearance of the old half-timbered houses are very much intertwined with Germany.

In Place de la République you’ll see the statue of a ‘Mother Alsace’, mourning her two dead sons killed in action, one fighting for France, the other for Germany. The statue reminds us how the city was fought over, with members of one family fighting in different armies on opposing sides; father against son or brother against brother. 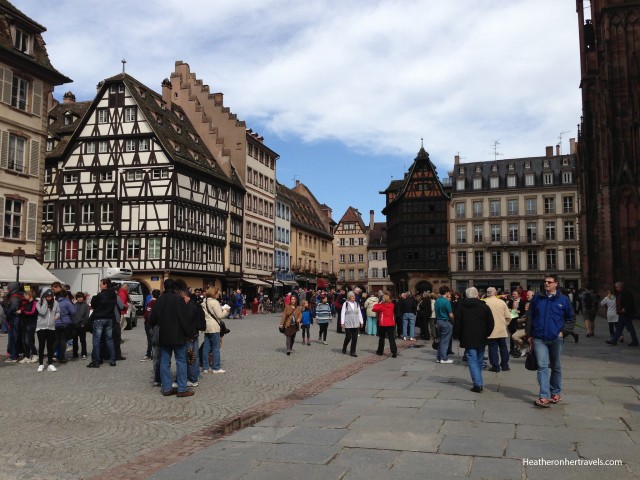 A good place to start your visit is the cathedral square where the old buildings now house souvenir and gift shops as well as atmospheric bars and restaurants. At the gothic Cathédrale Notre-Dame de Strasbourg, the facade of pink sandstone is covered with ornate carvings, with a spire that still towers over the old town. Inside, the grey stone is illuminated by the glow of stained glass – especially the impressive rose window – and to one side hangs the gilt organ case. If you happen to be there at 12.30, the Renaissance astronomical clock will reward you with a show of animated figures, attracting a crowd of visitors. For those who have the energy there’s the opportunity to climb the 332 steps up the spiral staircase to a platform, giving you a panoramic view over the rooftops of Strasbourg. 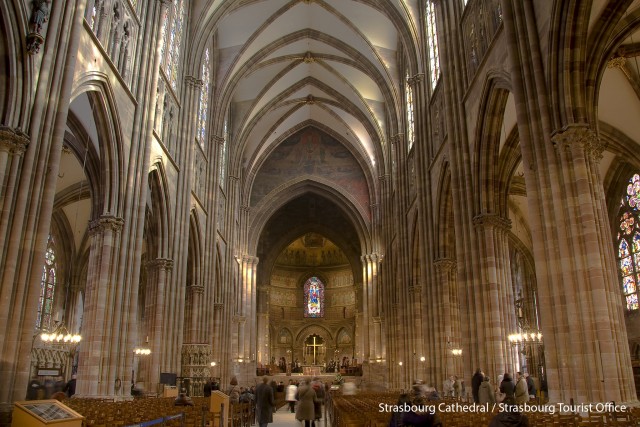 The Petite France area of Strasbourg is one of the most charming places to wander, enjoying the mediaeval houses overlooking the network of canals, with flower-filled window boxes everywhere. Although these old houses were originally built for artisans, many of them have been converted into bars and restaurants where you can sit on the wooden balconies and watch the boats pass by. 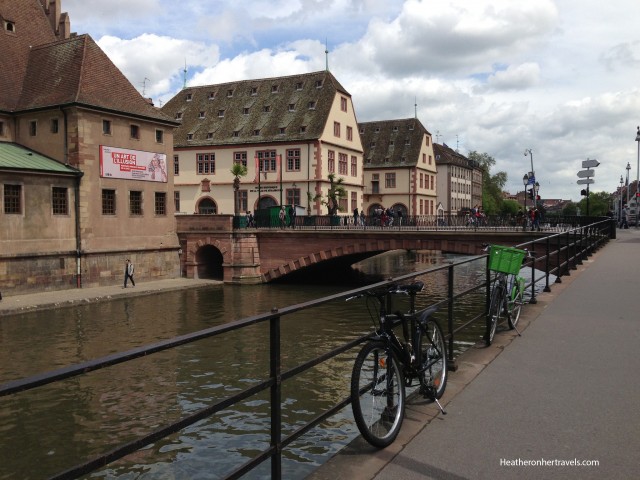 Another popular way to see the historic centre of Strasbourg is to take an open-top boat tour around the canals that encircle the Grand Île with a headset providing commentary in multiple languages. You’ll go through the locks of the canal, under the covered bridges and past the tannery quarter, with some of the tours continuing on to the modern part of Strasbourg to see the European Parliament and Court of Human Rights. 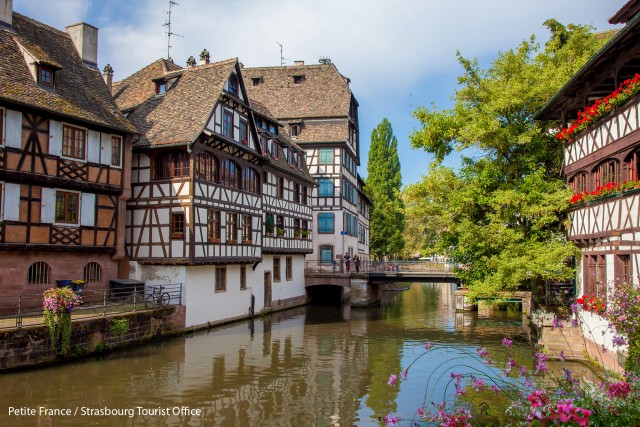 Modern Strasbourg and the European capital

Once you’ve learned about the wartime history of Strasbourg it’s easy to understand why the city places such importance on the institutions that enable European countries to work out their differences through discussion rather than conflict.

Strasbourg is the home of the European Parliament, European Court of Human Rights and Council of Europe, which are housed in striking modern buildings near the pretty Orangerie Park. The institutions are only open by special arrangement for group visits, but you can admire the architecture from outside or from one of the boat trips that passes on the river nearby. 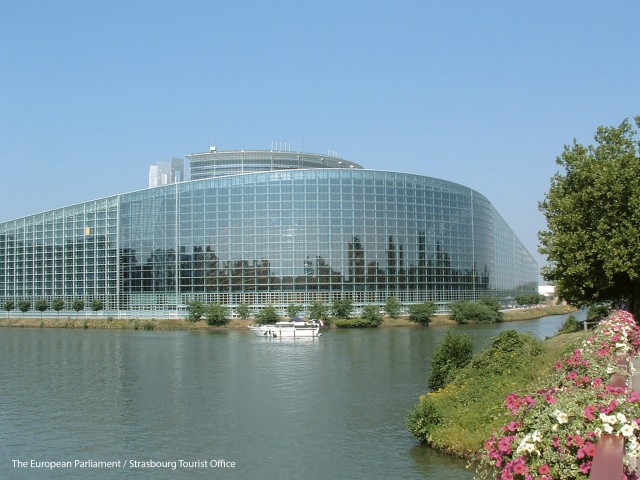 The storks of Strasbourg

If you visit the Parc de l’Orangerie, look out for the storks that are the symbol of Strasbourg, their nests seen throughout the city perched like hats on the top of the pollarded lime trees or chimney tops. From this park they were successfully re-introduced to Alsace after reaching near extinction in the 1970s. It’s considered good luck to have a nest on your house and the locals will tell you that if you leave a piece of sugar out for the stork it will bring you a baby! 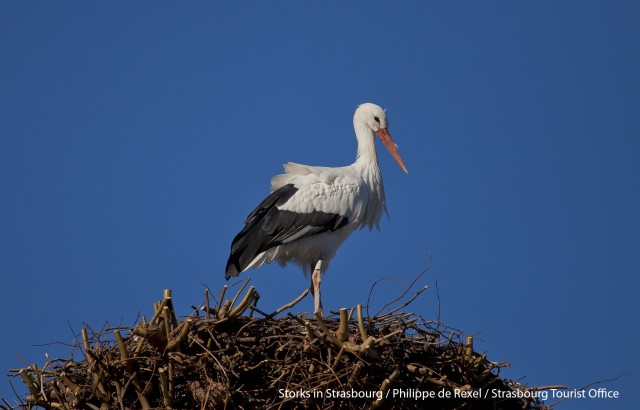 You have the option to visit Strasbourg for the day on Headwater’s Alsace’s Route du Vin Cycling holiday, where you’ll cycle off the beaten track through vineyards and cherry orchards, and on traffic-free riverside trails.

You can also add a Strasbourg city break to the start or end of any Alsace holiday, which offers easy walking through vineyards and forest with views of the Black Forest and Vosges Mountains where your walking takes you along the world-famous Camino de Santiago and through the picturesque Vosges National Park. You’ll pass through ancient forests and some of the region’s finest vineyards with views of hilltop châteaux with every opportunity to stop for some wine tasting.