Cycling in Brittany - from the point of view of my partner, who finally - finally - gets to choose our holiday

Cycling in Brittany – from the point of view of my partner, who finally – finally – gets to choose our holiday

I was adamant. She knew this because my adamant face is entirely different to my habitual amenable face. She had successfully dodged my bucket-list holiday for years, but as the brochure on the coffee table was slid into her peripheral vision, she began to smell – figuratively speaking – a rat. I had found the holiday with all the regular components in droves (sightsee-sunshine-sumptuous supper-repeat) and cycling. At last… trapped! 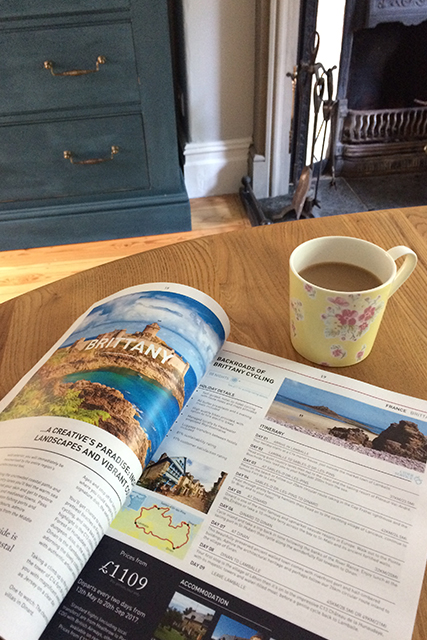 Before there could be any back-pedalling (pun intended), the plans were swiftly made and we embarked on our Headwater Backroads of Brittany Cycling experience.  I’m guessing that it wasn’t in a spirit of selfless compromise that she capitulated, rather that she found the brochure’s descriptions so markedly reassuring (‘Comfy gel saddles’, ‘wonderfully flat’, ‘swimming pool’, ‘elegant terrace’), she suspected that I had typed it myself. The holiday is an eight night’er made up of four cycling days (20 to 31 miles per day) and four leisurely days in-between. (What’s not to love?) 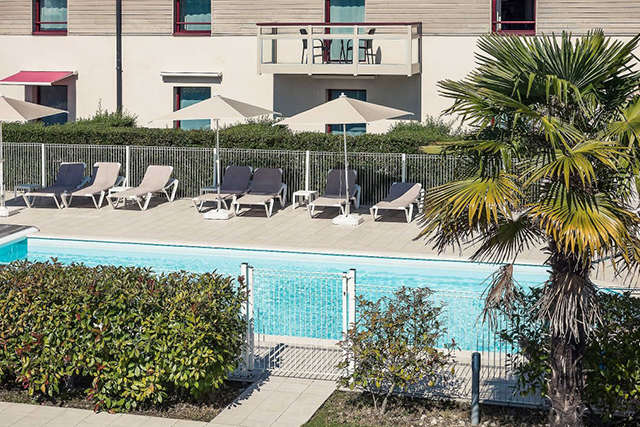 Fast forward to the end of the tour’s Day Six and we are at the sublime Hôtel Mercure Dinan Port Le Jerzual in Dinan, reflecting that at some unspecified point on this journey, there was evidence detected in her choice of adjectives that she was starting to see the cycling light. This evening, we are at the tail-end of a 20-mile cycle along Brittany’s Rance estuary from Dinard to Dinan, in the pleasant space between douche and dîner, enjoying the combined effect of exercise-induced serotonin and kir breton-induced boozy endorphins. As we decide between the hotel’s full entrée-plat-fromage-dessert to which we are becoming accustomed, or a hike up the steep cobbles to town (France’s answer to the Hovis hill, complete with leaning timber-framed medieval houses) for the ubiquitous galettes and crêpes, we spy Steve The Rep. 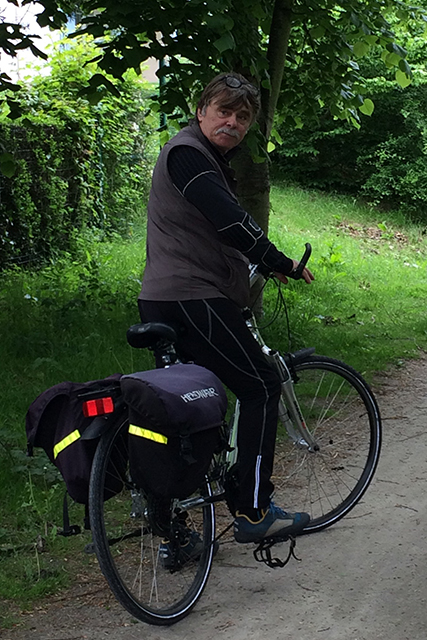 We met lovely Steve back at the very start of this trip, when we wondered if he was secretly questioning our togetherness, the disparity of our cycling attire clearly suggesting otherwise. Now, ce soir, he is here on account of another Headwater punter’s luggage transfer.

He’s the kind of guy who has you impulsively patting the seat next to you, generous and natural as he is to share his insider-tips (best local cider et al), folks’ holiday anecdotes and workings-of-your-bike spiel (which incidentally, despite Headwater bikes being terribly user-friendly, we wouldn’t have wanted to get to grips with en français). He is particularly keen to find out how we have fared with Headwater’s tailor-made GPS route – this we have downloaded on ‘Ride with GPS’ prior to our arrival – and is clearly not surprised to hear that despite a touch of initial technophobia (or dogged reluctance to part with paper), the nice lady in the phone has facilitated our ride every pedal of the way. We proceed to share our highlights of the day (forgetting in our enthusiasm that Steve could cycle it blindfolded; he’s lived here 20 years) and bless him, if he’s bored to tears with the following recount, he’s too professional to show it. 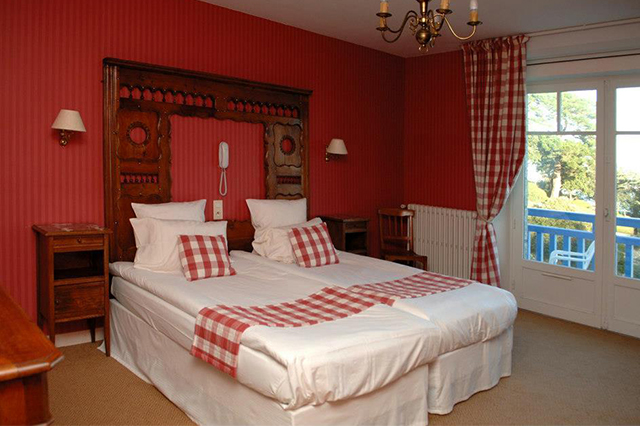 Since this morning’s farewell to the pieds-dans-l’eau Hôtel Printania (a gem: old-world Breton furniture, waiting staff in frocks of bygone Brittany) and pedalling the three street negotiation out of Dinard itself (pinnacled belle époque villas, stripy beach tents, sandy bay), we have loved the combination of the Voie Verte cycle path and blissfully tranquil roads and even the small sections that were more difficult (it’s a 1+ activity holiday-rating, just three or four gratifyingly short hills) I managed with a combination of granny-gear and dismount-push (this last spectacle seeming to quench her desire for karmic comeback). Conversely, where safe, we revelled in the downhill thrills by hell-for-leathering like giddy teenagers – invigorating doesn’t come close.

With no real need to stop and survey paper notes, we paused wherever we wished to and did so frequently to rummage in the pannier for bonbons au caramel and admire the views. Wending our way from pretty market town (Pleurtuit, on aime) to village (le Minihic-sur-Rance, on aime) and hamlet (la Mettrie Pommerais, on aime), we shared observations, namely that there’s a spiritual aura of the West Country here and were it not for the lace curtains, shutters and roadside shrines reminding us we’re en France, we could have been forgiven for thinking we were on the Helford estuary. We also noticed the overwhelming feeling of space and tranquillity, the only portes ouvertes those of the boulangeries-épiceries, wafts from which we failed to resist. (‘Hand-signals suspended; I’m eating a croissant’.) 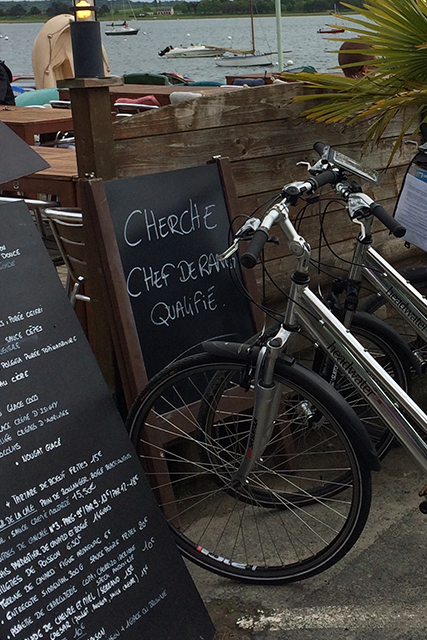 We opted to take the very short detour off-route for lunch at the recommended Restaurant de la Cale, on the slipway in pretty Plouer-sur-Rance. It was warm enough (maybe on account of our body-heat) to eat on the terrace so we relished our Menu Brasserie choices – moi, the salade de chèvre chaud avec damn good frites – whilst masts in the bay tinkled and Breton gents foraged for seaweed on the beach. Pausing for a proper lunch was quality-time indeed, especially as we are used to lunching en famille: parsimonious missions to sustain ourselves on baguette and Président alone.

A quick survey of the map and notes to check our progress alerted us to the fact that we had nailed an awful lot more than we thought; time flies à vélo. One busier road (that’s busy by France’s standards we were willing to wager), then a cycle-path all the way into destination Dinan.  Somehow we became briefly separated somewhere on this last 5k stretch but this this mattered not: hugging the Rance this closely, I would have challenged anyone anxious/navigationally-challenged to get stressed/lost. Anyway, before long we were reunited in time to enjoy a special moment, verbalising a wish to be permanently moored in one of these special spots.  And then, cycling seamlessly onto Dinan’s picture-perfect harbour, we are in firm agreement that France, especially at this pace, is ridiculously beautiful. 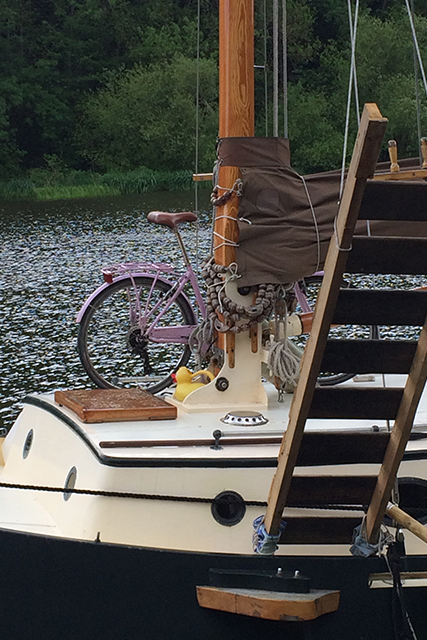 Back at home, the brochure still sits there on the coffee table, as yet unassigned to the recycling pile.

Any thought of re-cycling, anyway, may give her an entirely different idea. 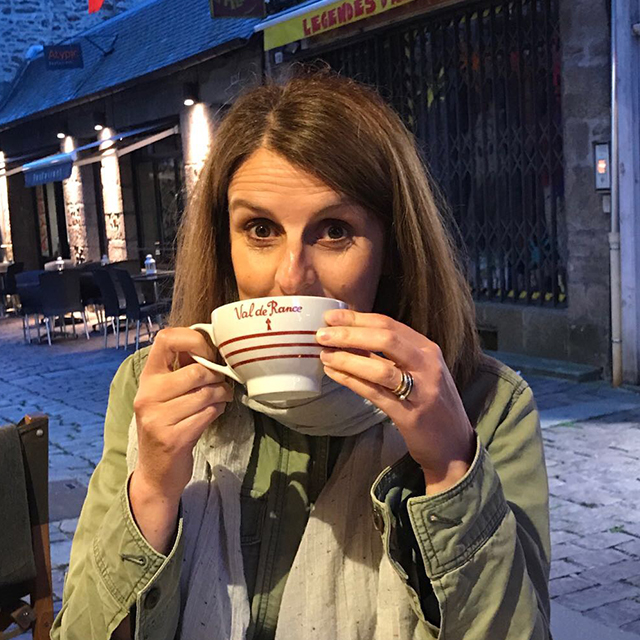 Highs –Val de Rance cider out of a teacup at the Crêperie Ahna, Dinan (reassuringly full of locals).  And the cycling? We noticed a mutual driver-cyclist respect in France so cycling on the roads always felt safe.

Lows – None, apart from almost getting tangled up at one point with something squirrely on a lead. (French dogs are so precious).

Come again? – Yes! Spotted Headwater’s gorgeous cottage Le Martin Pecheur in an idyllic riverside spot in Dinan, ideal for families. Maybe combine it with a fête (who doesn’t love a French fête). A holiday is nothing if not a recce for another.

Top tip – Follow the GPS route offline (in aircraft mode) so that it doesn’t drain battery. And largely ignore the weather forecast: Met said rain, didn’t see a drop – this micro-climate seems to have a mind of its own.

Read more about this trip here.