Grab a coffee, relax and enjoy a Headwater blog on Greek Picnics
BOOK AND TRAVEL WITH CONFIDENCE
Read more about our enhanced flexibility

While walking along a country track in the foothills of the White Mountains of western Crete a few years back, the rasp of cicadas was loud along the broad valley we were following.
It was a good day. Blue sky, fresh air and still. It was approaching noon. The grass was beginning to bleach in the stonger sunshine as spring turned gradually to summer, and each step kicked up powdery white dust that coated my boots. 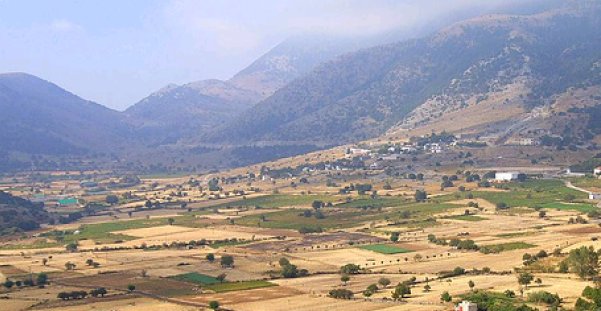 Up ahead just off the track, I could make out a group of people in the shade of some oak trees. Certainly an unusual number to be so far out in the countryside – we were in the middle of nowhere. As we approached, the bleating of sheep became audible. A dozen men were shearing next to a pen of animals, then releasing them to scamper off again, bald and indignant.
The buzz of cicadas became the buzz of conversation, shouts and laughter, and as we came closer, the smell of roast lamb floated tantalisingly through nearby tamarisk trees.

Suddenly a big guy on the edge of the group broke off and strode towards us. He looked kind of threatening, sweaty and angry. He had a pistol tucked into his waistband.
I wondered, slightly alarmed, what we had done to offend him – maybe we were tresspassing. As he approached us he reached for his revolver and while still 10m away he drew it, pointed it in the air and fired six successive shots that echoed around the valley.

When I opened my eyes again, everyone had downed tools and stopped for lunch.

He looked as if he had enjoyed the joke and as he put his revolver away he gave us a big smile,  shepherding us over to the barbecue pit where we sat with everyone else, not understanding a word but conversing in sign language while drinking cold cans of coke and being handed fabulously tasty chunks of roast lamb on hot skewers.

You don’t forget picnics like that in a hurry.

Crete was the home of the Minotaur of Greek Legend, and the amazing remains of the Palace at Knossos dating from 2000BC just outside Heraklion.

“Except the blind forces of nature, nothing moves in this world which is not Greek in its origin”.
Henry Maine